[link—standalone] I now have a git server setup which serves as a mirror for my stuff on github. My custom version of LARBS also pulls from my git server now instead of from github. (I'll write more about what I've done with LARBS in a later post.) I also wrote an article explaining how to play CDs, DVDs, and Blu-Rays on Linux with mpv. I plan on adding a section about burning discs soon, but there's still a few thing I have to get figured out before I write about it. Wed, 08 Dec 2021 11:53:26 -0500

DistroTube put up a video recently about how using Linux prevents unnecessary e-waste. Which he's absolutely right about. It's so easy to get a 10-15 year-old computer running like new again simply by installing Linux. And most people who use their computers for basic tasks like web browsing, word processing, emails, consooming product, etc. etc. could get by only using old computers running all free software.

He also pointed out the extreme hipocrisy of soylent-chugging, college-age, climate "activists" using Macbooks and iPhones. While He does make a good point: they could actually make a difference by buying used equipment and only running free and open source software. Activists are like the Pharisees: they say one thing and do another. Their idea of "rebelling against the system" is doing everything that their corporate overlords tell them to do without question. Communtists/socialists are the same way. If they were actually smart about it, they would give as little of their money and information to big tech companies as humanly possible, but they don't because they're apathetic and only do it as a LARP.

Moral of the story is: reject activism, rioting in the streets, etc. and just don't give evil people your money or information.

If you've spent any time browsing through Neocites, you've probably seen massive collections of these things on gay depressed 17 year-old's sites. Needless to say, most of the ones that I've seen are retarded. But ever since Luke Smith made a post about them, some other internet landchads started making their own that are actually quite good. So, I've added a few to my site. Maybe I'll make some of my own, too.

So, a little over a week ago now I said I would migrate my server from Debian to Arch. Long story short: it didn't go very well, so now I'm back to using Debian. The main issue was my own inability to manually configure nginx. Anyways, I'll refrain from messing around with stuff like that on my server from now on, as my website was offline for 2 days while I was doing that. I still plan on using Arch for my server, but I'll have to work out the kinks on my own computer for the time being.

Daft Punk is kill. I don't really have much to say, but, I feel like I should mention it here. I leave with this: 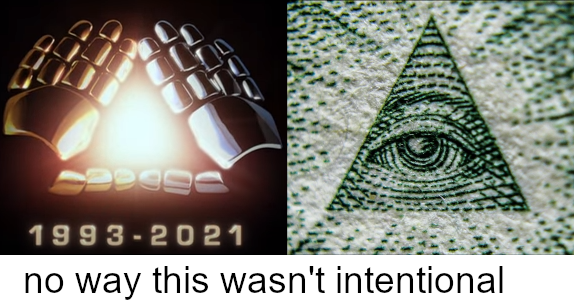 This Site Is No Longer Ugly

I've been meaning to get to this sooner but I have irl stuff to worry about. Anyways, I changed the background and text colors so it's no longer an eyesore, and I fixed the tor link since It's been broken for nearly a month, now. That's it, see you next month.

Yesterday I was trying to set up a searx instance on my server. Everything was going well up until I tried to actually install the searx software when it complained about some dependency not being the right version. I decided to check the debian package index site, and apparently this dependency has been out of date for a while now; someone commented about it being out of date on January 15th; one whole month ago. At that point I had flashbacks to a 4chan post I saw back in November of 2019 that read something along the lines of, "Don't wait around for some neckbeard package maintainer. Compile your own code like a real man!" So I tried compiling said dependency from source, then I tried installing searx again. This time it complained about the dependency needing a newer version of Python. So I compiled the latest version of Python, tried installing searx again, and then it complained about the depencency from before being out of date again. I don't know what happened but I don't care. I was so fed up at that point that I gave up and went for a walk in the woods. I plan on migrating my server to Arch Linux later on today, then I'll attempt to set up searx again. Contrary to what neckbeards say on the internet (to scare off normies), Arch doesn't actually break every 5 seconds. I've been using Arch regularly for about 6 months now, and have experienced zero breakages so it should be fine to use on my server.

I've made a tor mirror of this site (also linked on the home page) with the help of this tutorial. It's not any more difficult than managing a clearnet site, so I might use this for other things as well.

changing the look of this site

I've gotten a number of complaints about this site being difficult to read due to cyan-colored links on top of a blue background. I apologize for any unintentional retina-assults I might have caused. I'll get to changing the colors shortly!

Plans For The Future

Now that I've got my blog system worked out, I going to be updating this site more frequently, now. And once I scrape enought money together, I going to purchase a few more domains for other sites I want to make.

If you have any Good Sites™ you want to submit, shoot me an email. I'm compiling links now because /g/'s good sites seems to be very dead. I've also merged the flash and warez articles into the links page, and I added a bunch more sites to it as well. Have a look!

I've also joined a webring which is linked on the home page.

I've merged the blog and changelog pages into one, and you can now get an rss feed for it thanks to lb. This feed will be for minor updates about my life and this website, while more important writings will get their own page.

I've also added some more sites to the links page, and moved the stuff from the books page into the Downloads page.